Know about the various forms of music and dance that are exclusive to Shimla city of India.
Shimla: Culture: Music and Dance in Shimla

Music and Dance in Shimla 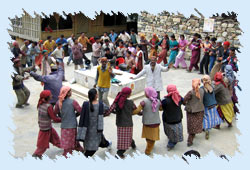 The style of music and dance in Shimla has not gone through much evolution. People over here still follow the traditional forms of dance & music of Simla. The dance and music of Shimla is basically religion oriented. All festivals are celebrated with traditional music and dance and they are an integral part of any festivity and celebration. The main purpose of indulging in music and dance is to invoke the Gods and seek their blessings. This practice has been prevalent since old days.

The music is dominated with instruments rather than vocals. The main instruments that are used while singing are Flute, Ektara Chimta, Ghariyal, Ghunghroo, etc. Along with these instruments, experienced people sing the traditional songs that are very pleasant to the ears. The major dance forms of Shimla are the Kayang Dance, Bakayang dance, Bnayangchu dance, Jataru Kayang dance, Chohara dance, Shand and Shabu dances and Rasa dance. These dances are exclusive to Shimla and are not practiced anywhere else.