Shimla, the capital city of Himachal Pradesh, has a rich cultural heritage. Read further about the culture of Shimla city of India.
Shimla: Shimla Culture 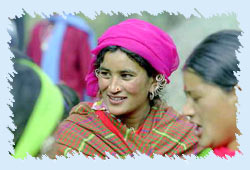 Located on the lofty ranges of the Himalayas, Shimla is a place that has been untouched by commercialization and globalization. It is very different from rest of the Indian states and has retained its old world charm. The culture of Shimla is such that it portrays a sound balance between traditional values and modern thoughts. The cultural heritage of Simla is very traditional and rural. Read on further about the culture of Shimla.

The people in Shimla depend on agriculture as a source of their livelihood. Cattle rearing is yet another way of earning a decent livelihood. The people in Shimla live in small huts with slated roofs. Every unit of village has its own shops and other facilities and necessities. There are regular fairs and festivals in these villages. You will find more information about the culture, music, dance, people and religion of Shimla in our related sections.