Take a look at the colorful and major fairs and festivals of Shimla city in India and know more about their celebrations.
Shimla: Shimla Fairs and Festivals 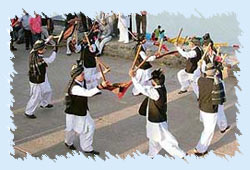 Stunning locales, breathtaking beauty and a rich legacy of cultural heritage and tradition - this is what one gets to see in the festivals and fairs of Simla. One should experience the amazingly lively and colorful celebration of all major fairs and festivals in Shimla while in India. Shimla not only celebrates its own local fairs and festivals, but also enthusiastically celebrates all the festivals that are celebrated all over India. Read on further for more information on the major fairs & festivals in Shimla.

Ice Skating Carnival Shimla
Shimla is India's favorite winter destination and what makes it truly special is the snowfall that it receives during the winters. Most tourists visit Shimla during the months of December, January and February to indulge in the lively ice sports like skiing, ice-skating or simple throwing snowballs!

Rhyali Festival Shimla
Celebrated during the rainy season in Shimla, Rhyali festival is of much importance over here. Since most people here depend on agriculture to earn their livelihood, the rains are an absolute must. Rhyali festival is celebrated to keep the rain Gods happy so that the agricultural produce does not get affected.

Shimla Summer Festival
The best reason to visit Shimla during summers has to be the famous Summer Festival that is held every year in the month of May. This famous festival is a riot of colors and festivity and is celebrated on a grand scale. The Summer Festival in Simla is a beautiful amalgamation of various talented people of India who make it an event that is remembered for a long time to come.

Bhoj Fair
This fair is held in the month of November for three days in Shimla. This fair attracts thousands of people from Shimla who come to pay respect to the presiding deity known as Devta Bansor.

Christmas
Shimla has a white winter and Christmas is celebrated with much joy and fervor over here. The true spirit of Christmas is experienced over here, as the place is famous for a beautiful church that is decorated beautifully during Christmas. Shimla also receives heavy snowfall which makes it all the more fun to celebrated Christmas.

Diwali
Like anywhere else in India, Diwali is celebrated in Shimla with much devotion and enthusiasm. Not just the Hindus, even the local native people of this place celebrate Diwali. The whole of Shimla lights up and it looks no less than a wonderland.

Lavi Fair
One of the most important fairs of Shimla, Lavi fair is celebrated as a tribute to the signing of a mutual trade treaty between Tibet and the former Bushahr state. Many cultural shows are organized and the main focus is on small-scale trade and business among the shepherds and other locals.

Lohri
Lohri is a festival that is celebrated to mark the beginning of the sowing season. In January every year, the skyline of Shimla lights up by numerous bonfires that are lit across the place. The first Rabi crop of the season is sown during Lohri.

Sipi Fair
This fair is celebrated in the month of May in Sihpur as an honor to Sip Devta. The fair is very popular among people and thousands throng the Sipi fair to participate. The fair has been celebrated since a long time and the Rana of Koti used to be the main spectator in the fair. Many cultural programs are organized which include archery competition, magic shows, jugglers, acrobats, etc.