Check out the major religions that are followed and practiced in Shimla, India.
Shimla: Culture: Shimla Religion 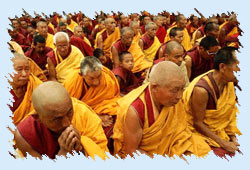 Shimla does not have a particular religion that makes it stand out. Despite an amalgamation of many different religions in Shimla, the major religion in Simla would be Hinduism as elsewhere in India. On your visit to Shimla, you will be surprised to find not just temples but also churches and Buddhist monasteries. The churches conduct regular services for the Christians who live here. The churches here have been built during the colonial rule as Shimla used to be summer capital of the British.

Most of the native people of Shimla follow a combination of Hinduism and Buddhism. This is because of the proximity with Tibet that has in turn influenced the lifestyle of people in Shimla. The people living in valleys near Shimla like Spiti and Lahaul are famous sites for Buddhist monasteries. Along with the monasteries, one can find many temples that are dedicated to Lord Shiva and other Hindu Gods.